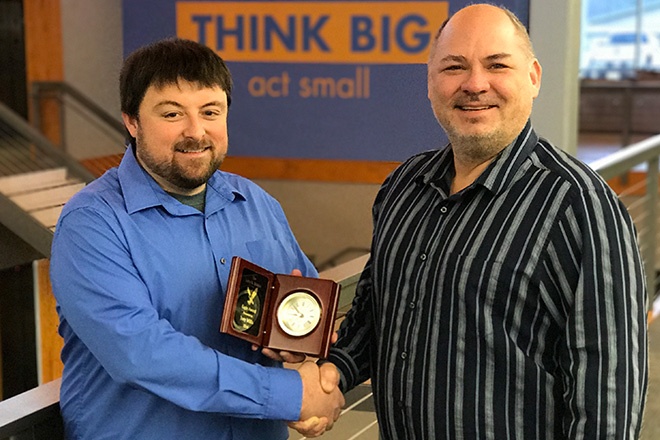 Jonesboro, AR – Ritter Communications recently announced that Joey Willis, a network engineer in the company’s Jonesboro office, is the 2016 recipient of the Larry B. Dinkins Eagle Award.

“Joey has an insatiable thirst for knowledge and has taken technical ownership on numerous key network and service initiatives,” said Greg Sunderwood, Ritter’s Vice President of Engineering. “He is always willing to help anyone that needs a hand regardless of the task. He is continuously looking at ways to improve himself, our network and our customer experience.”

Willis, a native of Trumann, AR, joined Ritter Communications in 2007. He spent eight years as a purchasing specialist before he was promoted to engineering technician in 2015 and to network engineer in 2016.

The Eagle Award is given each year to an employee who goes above and beyond expectations, possesses a helpful attitude and honors Ritter values.  The Eagle Award selection committee honors an employee who has continual growth in his/her career, has a heart for Ritter customers and is an example to other employees and has the respect of his peers.  Nominees possess leadership and team spirit, and the recipient of this award is well-liked by employees.

The Eagle Award originated in 2004 to honor much-admired Ritter colleague, Larry B. Dinkins, following his unexpected passing. Larry left an indelible impression on the Ritter team thanks to his uncompromising personality, feverish commitment to customer service and the exceptionally high performance standards he demanded, both from himself and the team around him.

An avid bird watcher, Dinkins had a special affinity for the bald eagle, even traveling to watch and care for eagles. Ritter management considered it a fitting tribute to name the award after these noble creatures Dinkins so admired, hence the Eagle Award was born.