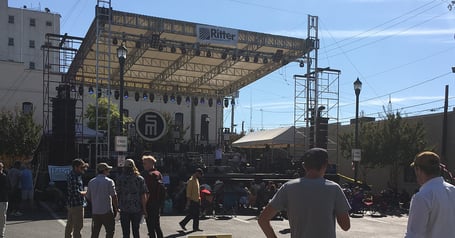 FUEL is an American rock band formed in 1994 known for their hit songs "Shimmer," “Hemorrhage (In My Hands),"  "Bad Day” and “Innocence”. The band has sold over four million records worldwide.  "Hemorrhage (In My Hands)" was Billboard magazine's #5 Rock Song of the Decade according to their Best of the 2000s Rock Songs chart.  The hit also became the No.6 Alternative Rock song of the past 25 years according to Billboard's Alternative Chart 25th Anniversary: Top 100 Songs.  The Band released their Greatest Hits album in 2017.

SmashMouth is an Alternative American rock band from San Jose, California formed in 1994. They are known for songs such as "Walkin' on the Sun",  "All Star", and a cover of The Monkees' "I'm a Believer" (2001), the latter two of which were featured on the soundtrack for the animated film Shrek.  In May 2016, Smash Mouth released their first live album titled Playlist: The Very Best of Smash Mouth through Sony Music. The Bands lead singer Steve Harwell was a featured cast member in the sixth season of the VH1 reality show, The Surreal Life, in 2006.  Harwell has also appeared on other television and radio shows, as well as making a cameo in the 2001 film Rat Race.

Also taking the stage on Saturday, will be the Whyte Caps, a progressive rock band from Gulf Shores, Alabama.  The three powerhouse musicians have created an industry buzz with their sound which has been compared to the Red Hot Chili Peppers and CREED.  In the past year they have played over 188 venue stages and five festivals and are a familiar sound at the FloraBama and the Hangout establishments in Gulf Shores, Alabama.  The late lead guitarist for Three Doors Down, Matt Roberts noticed the band and offered help produce their first EP, “Four in the Van”.  The Whyte Caps released their first full Album entitled Broken Record in 2017 which can be found on ITunes, Spotify and iHeart Radio.

Tim McCall, Festival Chairman, said they are “excited that this year we have two nights of entertainment at no cost to the community. It is all about providing our community and visitors with an opportunity to see Jonesboro and all the things we have to offer.”

The festival also hosts the Kansas City Barbecue Society-sanctioned Arkansas State Championship.    Jack Turner, event coordinator said, “The past few years we have seen contestants from all over the country.  We have been working hard to make the BBQ event bigger and better in 2018.   We have some great sponsors this year and look forward to giving away over $10,000 in cash and prizes.”

The Kansas City Barbecue Society (KCBS) is the largest BBQ organization in the world. Each year, the Grand Champion is invited to the American Royal and Jack Daniels World Championship.  Turner said, “Everybody’s got a chance to win some big cash, this is fun for some and serious business for many grillers.”

The Festival will also host their 2nd annual Steak Cookoff Association event.  The Jonesboro event will be one of over 180 throughout the world this year including new events in Austria, Canada, Mexico, Switzerland, Italy, the Caribbean and New Zealand. For more information for the September 28th event contestants can visit http://www.steakcookoffs.com. McCall and Turner, who have organized the event since inception said they are “excited to have the support of Ritter Communications this  year and hope to continue to expand the event into a larger Arts and Entertainment festival moving forward.   The event also includes activities for the kids, plenty of food, vendors, crafts and a kid’s area sponsored by HiJinx and the Express Employment Professionals Clydesdales will be downtown on Friday evening for carriage rides to support the Childrens Miracle League.